Panj Takht are 5 important Gurdwaras of Sikhism which have a significant respect. In Sikhism, Guru is referered as Sachcha Patshah (true king) and to his gaddi (spiritual seat) as Takht and the congregation he led as darbar (court). These Panj Takht take Religious, Social and Political decisions as required by Sikh community.

In 1609, Sri Guru Hargobind Singh established the first and the most important one of the Panj Takht 'Akal Takht' near Sri Harmandar Sahib (Golden Temple) at Amritsar.

Other Gurdwaras of Panj Takhts are :

Akal Takht is the Supreme, Throne of Immortal, of Panj takht and is situated inside Golden Temple complex in Amritsar.

Akal Takht is Social and Political headquarters for the Sikh community. It is also Supreme Sikh authority to take all decisions on Social, Political, Economic and Religious welfare of Sikh community. The decision of Sri Akal Takht are respected by Sikhs all over the world.

Takht Damdama Sahib has linked to the Tenth Sikh Guru Sri Guru Gobind Singh, who prepared the revised and authentic version of the Adi Granth which is now being honored by the Sikhs as Guru Granth Sahib, their perpetual Guru or spiritual guide or teacher.

The compiled final edition of Sri Guru Granth Sahib, in 1705, is also known as the Damdama Sahib Bir. Takht Sri Damdama Sahib was officially recognized as the fifth Takht on November 18, 1966.

The foundation stone of Takht Sri Keshgarh sahib was laid on March 30,1689.

Takht Sri Keshgarh Sahib is the birthplace of the Khalsa with Sri Guru Gobind Singh called a special congregation on the 1699 Vaisakhi day.

Kesgarh Sahib has many historical Relics which belonged to Sri Guru Gobind Singh. 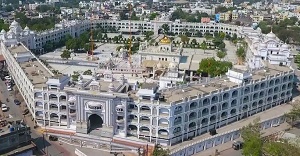 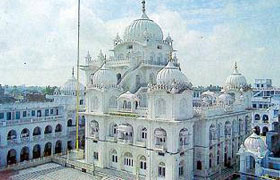